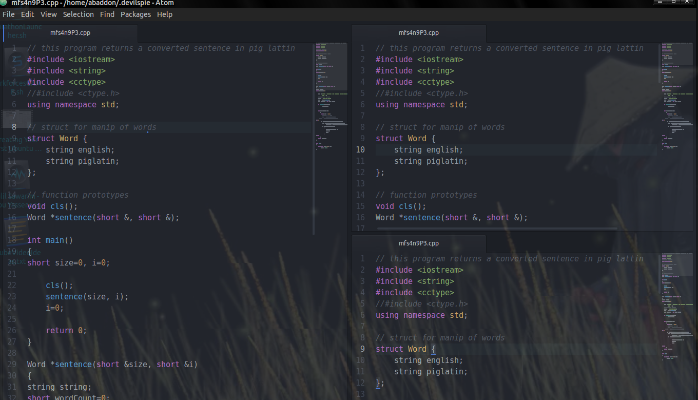 I've been programming for a while now and am enjoying the process a lot. The challenges, the mental stretches, and the success of seeing one's dreams and ideas come to fruition can only be experienced rather than explained. Still, not all is wonderful throughout the process. For instance, choosing an IDE, Integrated Development Environment, can and often is an ordeal in and of itself. Each developer has questions and they need to have answers. What is the size of the program? Does it have syntax highlighting? How quickly does it launch? Is it open source? What programming languages work best with it?

Visual Studio is about 4GB in size and launches slower than molasses falling from a container. DevC++ is about 500MB and launches in half the time Visual Studio does. Finally, Geany, it's smaller than 120MB and launches faster than ether of them. We then have others like Netbeans, Code:Blocks, Eclipse, and many many more filling the rosters. Still, I have not found an environment that I love and would rave over. Rather, I have one or two that I tolerate and the rest I despise. This is frustrating and has dampened my enjoyment of programming to varying degrees during different situations. I will say that I'm picky though and at times am probably not using an environment to its fullest to better appreciate it. Nevertheless, there should be a half-way point where concessions are made on both sides.

For instance, I will accept a larger program with more features providing it doesn't take a decade to launch. Or, I will accept fewer supported programming languages for syntax highlighting, etc. To meet my requirements and needs I've taken a slightly different approach to tackle my dilemma. With the exception of Geany, I don't actually use the above IDEs. I stick to text editors such as gEdit, gVim, Vim, Geany, and Nano. This greatly reduces the disk space a lotted to my IDE as I only need one of the programs. These editors have varying features and different skill requirements too: caugh, vim, caugh. I generally stick with Geany and then Vim as my auxiliary editor which keeps everything light, fast, and colored. But I want more! I need more! I need sub-panes, tree views, integrated terminals, and so on! What a plight!

Geany has only two panes to work with and even then it's clunky. The other editors don't have secondary panes at all. Geany also allows for a single terminal sub-sub-pane. I need more than that and so I ended up finding Sublime. It's a text editor with nearly everything I want. It really impresses me and I thought it couldn't get any better as it has multi-panes for code, tree views, etc. Still, it is lacking a few key features needed or wanted. Sublime isn't open source and it hasn't any integrated terminal support. I felt lost and still unhappy even in the marvel that is Sublime. I searched, hunted, and scrounged about until I found my holy grail of text editors! The feeling was like an atom bomb hitting me with its glorious radiation and blissfully passing me away to Nirvana. Ironically or with my skilled writing and metaphors, the name of the text editor matches my description. It's called Atom. It is powerful and open source. My two favorite descriptors together at last!

Atom is a programmer's dream come true. It allows for multiple sub-panes and multiple sub-terminals to code quickly and easily. It supports syntax highlighting and directory views. Plug-ins allow for even more enhancements that I can't even begin to imagine! Not only that, Atom is as fast and lightweight as Geany. All of this and more under an open source license! All my current needs and picky wants are met and there is a new horizon of options available to me that I can't wait to explore! I hope everyone will find this diamond in the rough and enjoy it as much as I do!